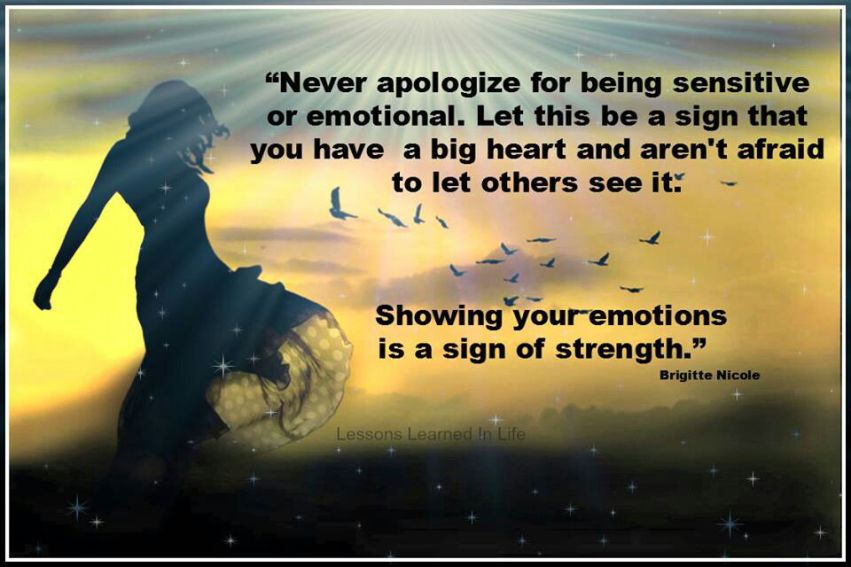 I started my strength journey the end of June of 2010. My husband Diego had already started the program about a year before but I was in such a bad state with my back that I couldn’t even imagine trying to ANYTHING, let alone a barbell program. That is, until I had the worst back episode in May of 2010 that left me lying on my stomach for almost a week, unable to eat, sleep or walk. I never wanted to be in that kind of pain again. And i haven’t been since I started Starting Strength.  You can read more about my back story here.

The beginning of August 2011, I joined a modern dance company in Baltimore called Deep Vision Dance Company. Thanks to strength training, this 36 year old was able to start dancing again, after two years of being unable to dance and thinking I would never dance again. Now there I was, the oldest in my company and stronger than I had ever been in my life. The end of August, with the coaxing of a friend of mine, I decided to compete in my first Strongwoman contest in October and started training for the contest. My business was growing. I was dancing again. And more importantly, I was getting stronger. 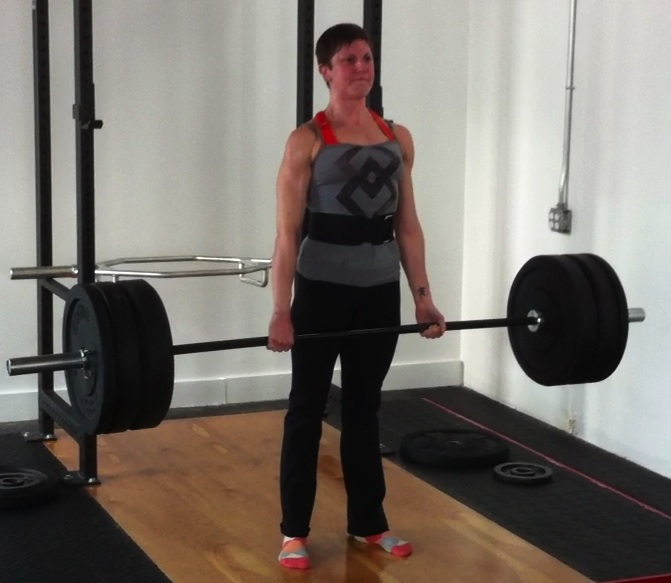 May 2011, deadlifting. One month before I opened the gym. Four months before Charlotte was diagnosed.

Then, in September of 2011, my sister Charlotte was diagnosed with Stage 3 colon cancer.

I have written about my sister Charlotte many times over the past five years. It will be two years this coming February since she died. There isn’t  a day that goes by that I don’t think of her and wish that she was still here. The day she died was one of the worst days of my life. The pain inside and out was real. I was an emotional and physical wreck for 3.5 years during her illness, through her death and through the first anniversary of her death. I became even more physically wrecked when my family and I learned that my brother-in-law had started dating a woman a week after my sister’s memorial service and then moved her into his house a month later. From September of 2011 to March of 2016, my body and mind was on a roller coaster ride that seemed would never end. The pain would come and go with such frequency that I truly thought I would never be able to fix myself. Ever.  I wrote about stress in a blog post a few months ago,  but I wanted to write about it again to remind people that stress is real and it manifests itself in more ways than one. Your goal is to not let beat yourself up when your body does not want to play along with you. I have had to learn this in a very hard way, accept it and deal with it for five years.

Then, in 2016, something finally happened that helped me truly release myself from my “pain.”

In January of 2016, I decided to finally contact my brother-in-law to ask if we could see my niece and nephew. I wasn’t ready to do it myself so I asked my husband if he could text him. He graciously did, but my brother-in-law wanted me to contact him directly, not go through Diego. But I couldn’t do it. I wasn’t ready. The anniversary of Charlotte’s death came in February, and I was still in pain. I trained, but it was unpleasant. I was ready to just never squat or deadlift again. Then something occurred in March that would finally end my stress and my pain.

In March, I asked Diego to write a new program for me. “I am done trying to coach myself,” I said. “I need you to tell me what to do and what not to do. I keep hurting myself, and I am tired of hurting.” He laid out a simple program that included squatting and deadlifting. “Just see what you can do and don’t do anything that hurts,” he told me. A week later, I was volunteering at Jack and El’s school in the lunchroom when Jack asked me if he and Eleanor could have a sleepover at my house that weekend.

“Emmy, can we have a sleepover at your house?”

I just looked at him. It was the first time that he had asked me directly about staying at my house since the summer of 2015.

Then he said,”And can you ask daddy? Ask daddy if we can stay at your house. Please.”

I smiled. I knew immediately what I had to do. “Yes,” I told him. “Yes, I will ask your father if you can stay over.” Now I was ready. It had been one year since I had last spoken to my brother-in-law, emailed him or sent him a text message. But I had to make the move. I had tried in January to communicate with him through Diego but realized I just wasn’t ready. And I really wasn’t….until that day in the cafeteria.

The next day, I emailed my brother-in-law to see if the kids could spend the night that weekend. Just like that. No drama. Nothing long. Direct and to the point. When he finally responded, it was a huge relief. Nothing about why we had not spoken in a year. Nothing about the “situation.” Because I did not make it about the “situation.” It wasn’t about us. It was about the children. Charlotte’s children. It was about Jack and Eleanor. Period.

A week later, I trained as usual. It was Tuesday which meant it was squat day. As I loaded the bar to warm up, I noticed something. I had no pain. A week before I could not squat to the 18″ box without pain. Now, with 95# on my back, I felt nothing.  Another week passed. Still no pain. I was now squatting and deadlifting every week. And without pain. My numbers were going up. I was feeling mentally and physically strong again. When I reached 135lbs with my squat, I asked Diego if I could go up. “Any pain?” he asked. “No,” I responded. “Then go ahead,” he said.   And I did. 135 became 140. Then 145. Then 155. Eventually it became 185lbs. The last time I had 185lbs on my back was in 2014. And it hurt. Now, there was no pain. And there has been no pain since the day I finally let go of my stress and my anger. I let go of my hatred. I let go of my selfishness, and I realized who was most important to me. Jack and Eleanor.

By the end of August, I had finally reached a 200lb squat and a 245lb deadlift. Five months after solid training without pain. 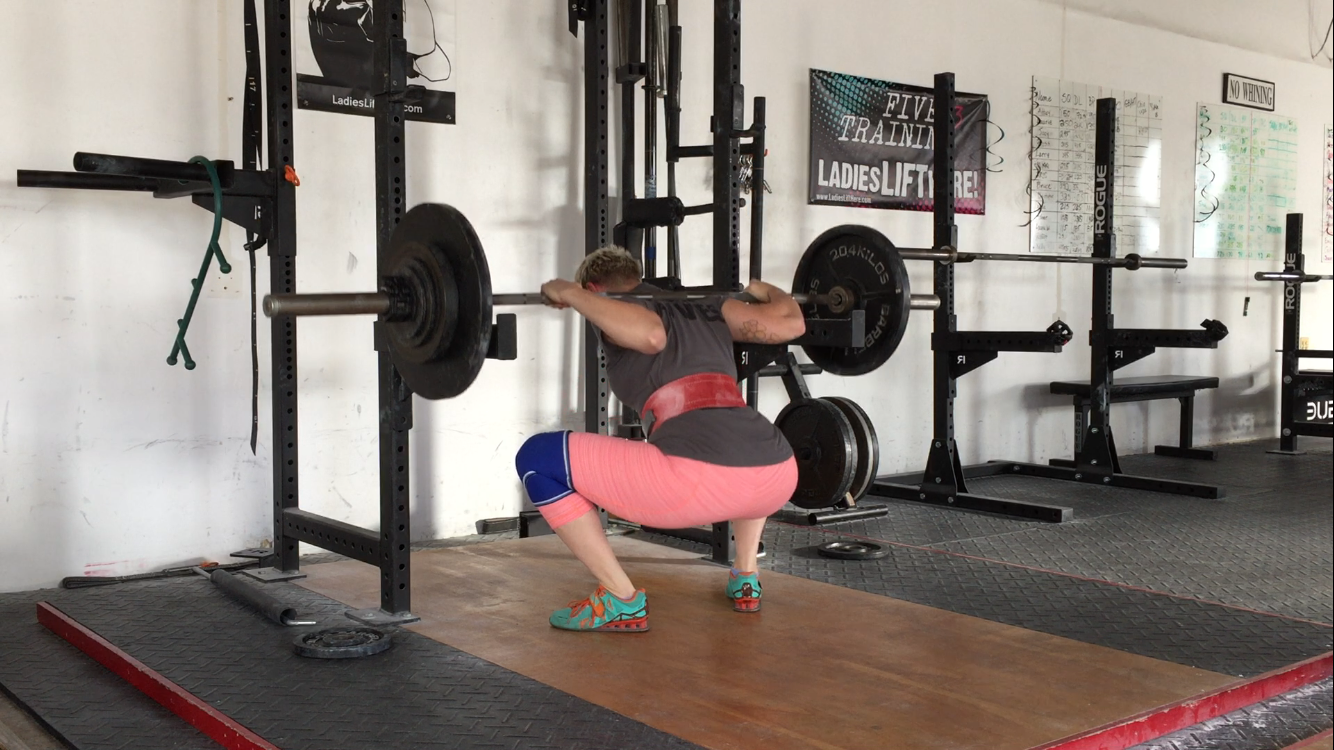 I was now back to where I was FIVE years ago.

On September 13, 2016, a few days before we left for our vacation, I decided to work up to a one rep max with my squat in preparation for the Starting Strength Classic the end of October. I worked up to a single at 215lbs.

The next day, on September 14, 2011, my sister called me to tell me she had been diagnosed with Stage 3 colon cancer. And that was it. Life took a radical turn and it has taken me five years to get back to where I was before her diagnosis, before Charlotte got sick, before she died, before the anniversary of her death. I am now squatting and deadlifting again……and without pain.  Honestly, I never thought I would get back here. Stress, anger and sadness plagued me for five years. It was not easy to let it go. I didn’t want to, but at the same time, I had to. And I did.

This is why when people start to complain about their lifting, how their numbers aren’t high enough or something hurts or they don’t want to take weight off the bar to work on a skill, I pause, take a breath, smile and and remind them that:

“This is life. And life isn’t fair sometimes.  You can either complain about what you cannot control and remember what you can control. If you can’t squat, find something else. Can’t deadlift? We’ll find another exercise that doesn’t hurt you right now. After five years, I am finally back to where I was before Charlotte got sick. Five years.  You just sometimes have to do what you can and suck it up.” 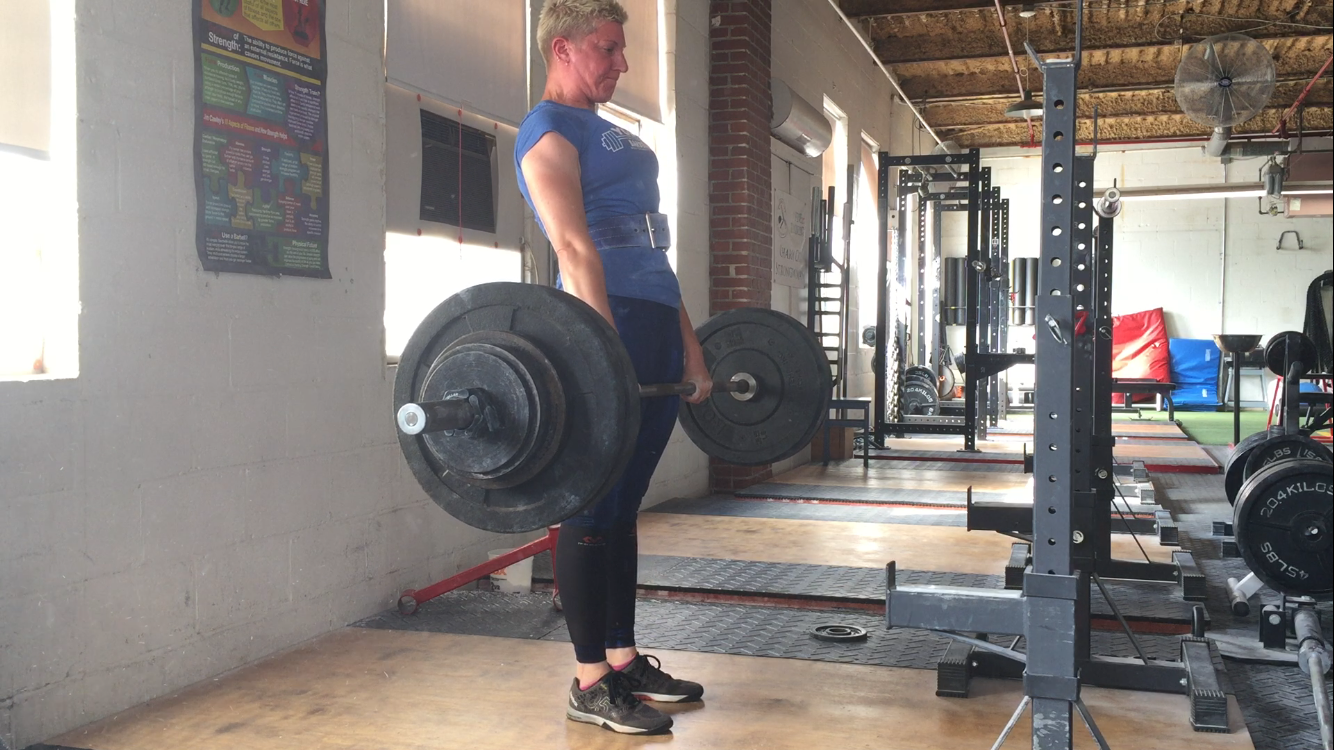 On Saturday, October 29, 2016, I competed alongside three of my clients at the Starting Strength Classic in Westminster at our friend’s gym, Westminster Strength and Conditioning. It was an amazing day. It was my comeback. I have not been able to compete in a full strength meet in five years.

For someone who could not squat the empty 45lb bar in March of 2016 or deadlift more than 95lbs without pain, THIS was a triumph. Sure, there were stronger women competing against me, and I loved being there with them, watching each and everyone of them, cheering for them. For me, the only competition has ever been and will ever be with myself. For me, this was a testament to the power of mindfulness. Stress tried to beat me. And it did, for five years. But finally, FINALLY, with a lot of work on my end, I finally was able to let it go.

For 4.5 years, I trained through pain. At times, I could tolerate it. Other times, I had to stop. This year, although it was stressful in the beginning, has been the best year so far for me training wise. I am slowly beginning to make progress again and once I let the last piece of the puzzle go, everything fell into place. I am training smarter, doing less which is helping me make MORE gains and getting stronger.

I keep things very, very, very simple and I am happier than I have been in a long time. I try not worry as much anymore. And I really try to not worry about what is beyond my control. I only concern myself with what I can control. I focus on my clients. I spend time with my husband. And, most importantly, I spend time with Jack and Eleanor every chance I get. They are now the reason I am living a more stress free life.

And because they are Charlotte.

Charlotte with Jack and Eleanor.