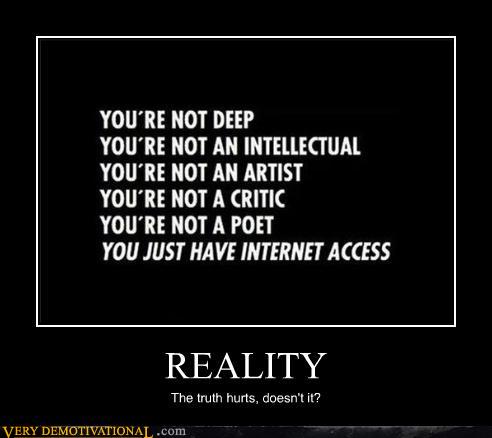 My mother always told me that if I had nothing nice to say about someone, I should keep to myself. Unfortunately, not everyone had a mother like mine. ;( Awhile back, I read an article on the NPR Facebook page about an artist named Julia Kozerski who decided that after her wedding in 2009, she needed to make a change. She needed to lose weight. 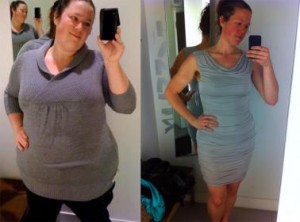 Within one year, Julia lost 160 pounds and documented her body transformation through pictures via her iPhone. These pictures were taken in various dressing rooms and became part of a series called Changing Room. Her transformation is inspiring and a true testimonial to what happens when one decides to make a positive change in her life. And while many, many, many people applauded her effort and her transformation, there were those who felt the need to react negatively to her story and shared their disparaging comments on the NPR Facebook page. I reacted by turning my frustration and anger towards these people into this post.

How is not wanting to be obese any longer different from an alcoholic not wanting to be categorized as a drunk anymore? When an alcoholic decides it is time to get sober, society views this as a positive change and we offer services to help this person regain control of their life.  And it is hard. It takes patience and time. He/she may regress and start drinking again. Support networks are put in place to help so the person does not feel alone.  The same thing applies to a drug addict. Or a smoker. These people cannot just have “one drink.” Or one hit. Or one smoke. We applaud them. We encourage them to make this change in their life. No one says to an alcoholic who decides it is time to stop drinking, “Well there’s a concept” or throws out some damn statistic that alcoholics who stop drinking will go right back to drinking in a few months. So why do we feel the need to say these types of things about someone’s weight loss? Food can be addictive to many people. When some people are stressed or tired or upset, they turn to food for comfort. Some turn against food and starve themselves. Just as alcohol helps to bring control in someone’s life or help them forget their life, so does eating or not eating. Julia made a decision that she did not want to be overweight anymore. She took control of her lifestyle and made better choices with her food, exercised, watched how much she ate and lost weight. She is not alone. There are many, many men and women who have transformed their bodies the same way, who decided that they needed to make a change in their lifestyle, that enough was enough. I admire these people. It takes strength to want to change. It takes patience and determination and perseverance to lose weight, a substantial amount of weight. It took Julia a year to lose her weight. And in that year, she was able to make an incredible transformation.

After reading the article, I made the mistake of doing something that I often regret. I read the comments. I honestly try to avoid doing this because I end up frustrated and discouraged with people. But I thought to myself, “This is such a great story! Who would say anything negative about this?” Well, I was wrong. The very first comment I read when I scrolled down said, “You know, it’s very unsafe to lose that much weight in one year.” What???? Did I just read this correctly? Not congratulations? Not well done? As I continued to read on, another comment read, “95% of the people who lose weight gain it back…..I hope NPR does a story about her weight gain.” Are you kidding me????? 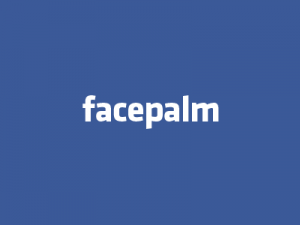 Seriously? The worst offender, who commented more than once, wrote these hateful words: “Simply speaking the truth to counter all the PC BS. A simple look at her face and you can see that she is not winning any beauty contests fat or thin. As for all the accolades given for her “determination” or “success” all she has really managed to do is correct a self created problem and return to a normal size. Do you really need to congratulate someone for doing something they should already be doing?” These are real words people. I am not making this up. And again, I ask you, would you say  this to a recovering drug addict? A recovering alcoholic? Would you say this to a recovering anorexic? These are hateful, hateful words. Judgmental. Ignorant. Embarrassing.

And while of course there were many positive comments made about her transformation, I had a really hard time getting past the ones that were so blatantly negative because this tyoe of behavior is becoming rampant in our social media. Not too long after the article about Julia came out, news anchorwoman, Jennifer Livingston of LaCrosse, Wisconsin, spoke out on live TV about an email she received from a man who felt the need to basically reprimand her for being overweight and not a role model for society. She responded very well and took the opportunity to speak out against bullying. The video made headlines and many shared their opinions about the matter. Many people supported her. However, as I scrolled down the comments of the article I linked to, there were many, many people, male and female, who felt the need to attack her for being too sensitive, too ugly, too fat and even to say that she was the bully, not the person who wrote her the email. And it is this that now  brings me to the point of my post, and my issue with the world of social media.

As I scroll down the News Feed of Facebook, I become more and more discouraged with what I read. I am not talking about what is being posted on people’s personal pages (although some of what I read does make my skin crawl.) No, I am talking about the comments. After I have read a story or post, I usually scroll down to check out the comments section. Now, this is okay if the article is about why it is important to strength train and the importance of  lifting with good form. I mean, no one is going to comment “Uh, What do you have against bad form? I round my back horribly every time I deadlift and I like it. Who are you to tell me I should NOT round my back?” (I guess you could have someone write that but I am pretty certain it won’t happen often.)

The times I should not read the comments are when I have just read an article about:

B. Someone writing about the evils of fruit.

C. Someone writing about the evils of gluten.

D. Someone writing about aerobic exercise vs. interval training.

E. Someone writing about who-the-hell-knows-what-I-am-writing-about-because-I-just-want-to-hear-myself-talk. 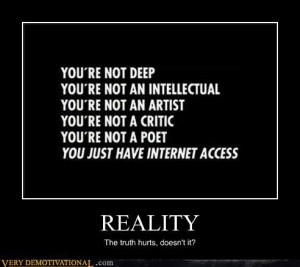 Seated at home, in front of a computer, everyone thinks they are boss.

I read the article and scrolled down to read the comments. And I know I shouldn’t. Because I am always disappointed when I do. The negativity is unbelievable. Why do we even feel the need to comment? Back in the day before the internet, you had to actually write a letter and mail that letter to the editor of a newspaper or magazine if you felt you needed to comment about an article. But not all of those comments were published. They only published a few, both positive and negative. And these could be published as anonymous or with your name. But today, ANYONE with a smartphone, laptop or computer can instantly make a comment about someone or something. Instantly. Then it’s out there for all to see along with that person’s name and perhaps their Facebook page too. There is nothing anonymous anymore about commenting. And although some comments are usually positive, depending on the topic, most of the time, I find that the comments are negative, insulting, derogatory and out right ignorant. What surprises me even more is that many of those making comments get into Facebook “screaming” matches. How do people find the time to be online for so long? Does your opinion really matter that much?

This issue has been on my mind a lot lately. It has become more and more apparent to me because on a daily basis, I surround myself with very positive people. I work very, very hard to create an environment at my gym that supports these positive people. My clients believe in what I have to offer them. They work hard. They encourage each other. They focus on performance outcomes. They work hard to take care of themselves outside the gym as well.  It is very hard sometimes to go through the Home Page of my Facebook page and not feel a little disappointed by some of the negative comments posted on people’s pages and quite often, comments posted primarily on a woman’s page about another woman….by a woman.  And as a woman, I find this completely and utterly rude, disheartening and down right disgusting. 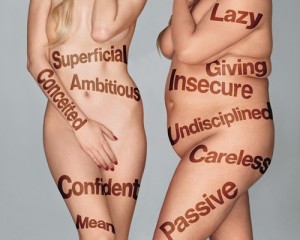 Why do we feel the need to label?

Do we really need to make others feel insecure because we may not be happy with ourselves? And if you are not happy with yourself, what are you doing about it? Just because you may be miserable in your life does not give you the right to put that misery on someone else who is trying to change. Day in and day out, women are subjected to hearing or reading such comments as “Her hair is too short.” “Her hair is too long.”  “Those boobs are fake.” “Those boobs are too big.” “Too small.” “She’s too tall.” “Too skinny.” “Too fat.” “Too thin.” “Too tan.” “Too pale.” “Too muscular.” “Not muscular at all.” “Skinny fat.” “Too pretty.” “Too ugly.” “Too smart.” “Too dumb.” “Too blond.” “Not blond enough.” WTH? ;(

Awhile back, Lady Gaga made headlines because she had gained some weight. I saw those pictures of her in her underwear and you know what?  She looked terrific. And she had those pictures taken to shut people up. She should not have had to produce those pictures in response to the crap written about her but she did because she does not give a crap about what people think of her. She’s Lady Gaga. Remember when Jessica Simpson received flack about her weight gain? Or Mariah Carey? Adele? The list goes on and on. Oh, I’m sorry, did I leave someone out? Oh, you mean a man? I’m sorry, no men that I know of are subjected to this crap on a daily basis. In fact, I don’t think you ever hear much talk about a male – athlete, actor, musician, gaining or losing weight. Women are “abused” on a regular basis about their weight. And now, you don’t even have to be a celebrity to get bashed. Just let NPR write a story about you and watch everyone decide whether or not you should be condemned or congratulated. Like their opinion even really matters. News Flash: It doesn’t.

You know, it’s bad enough that the media has to make women feel ashamed, embarrassed and humiliated about their bodies. Do we really need Facebook or other social media outlets making us feel bad too? Do we really need to comment about what women wear, don’t wear, should wear, should not wear? I wonder if Governor Chris Christie receives emails from women telling him he that he should lose weight because he is a role model for society and it is a shame that he has let himself go like that. Yeah right. As if.

7 Comments on “A Photo Speaks a Thousand Words”