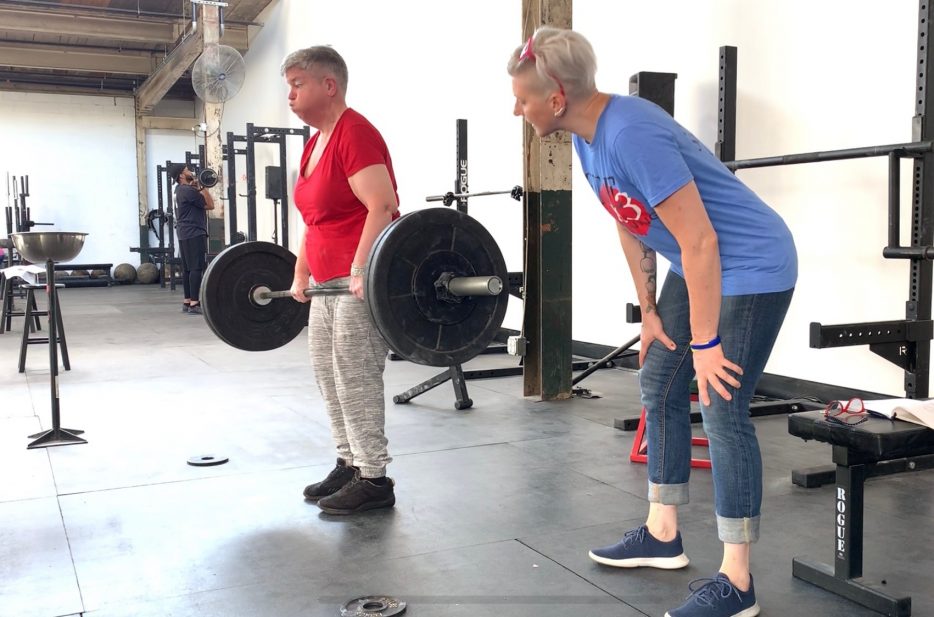 Claire started training with me in August of 2018. She had fallen earlier in the year, and been in physical therapy for her right knee since April. She had also taken a fall the previous year, injuring her right shoulder.  After the second bad fall, she decided it was time to come in and see us. Her husband, Bob, has been training with us for the past three or four years, and had mentioned Claire in passing a few times. Both Bob and Claire are nurses at Johns Hopkins Hospital. Bob is 66 years old, and Claire is 60.

Claire was born with a mild case of cerebral palsy; only her left arm and leg are affected.  She has difficulty with balance and coordination and, when she began with us, she was extremely weak. She had difficulty climbing stairs and would avoid them at all cost. Walking was okay, but she had a tendency to trip and fall, as both her balance and grip strength were rather poor.

Cerebral palsy is a group of permanent movement disorders that appears in early childhood. Signs and symptoms will vary among people over time, but may include poor coordination, stiff muscles, weak muscles, and tremors. It can also affect a person’s ability to move and maintain balance and posture.

When we first started, Claire trained only once a week. I put her on a modified strength program consisting of squats, presses and deadlifts. Squats were performed to a box, with no weight at first, slowly progressing to weighted balls, dumbbells/kettlebells, and then finally, a giant rackable cambered bar. We rotated through three different pressing exercises: ring presses, landmine presses, and bench presses. In the beginning, we deadlifted from mats, as she had difficulty getting into a good position from the floor. Once she was stronger, we removed the mats and she was able to deadlift from the floor. Progress was slow training once a week, but with each session, we could see consistent improvement.

Four months later, in December of 2018, Claire decided to start training twice a week. Although progress was very slow early on, once we were able to both squat and deadlift every week, Claire’s strength and coordination improved dramatically. We did not just focus on building strength but also confidence. During her first training week, we worked on getting down to the floor. We used mats to elevate the floor, essentially bringing the floor to her, and slowly, taking the mats away as she became more confident. This drill was a little traumatic for Claire initially, as it brought back memories of prior falls, and her inability to get back up on her own. Each week, we lowered the mats little bit. As Claire got stronger by squatting, pressing, benching and deadlifting, her confidence improved and she got closer and closer to the floor.

Once we had tackled the floor, we worked on climbing stairs. We started with two inch mats, and progressed to an eight inch box; the standard height for a step. This was her skill work, her practice at the end of each training session. We eventually moved to the stairs outside the gym and did multiple rounds up and down the steps  Her confidence at work increased and stairs did not seem as daunting as they used to be. She also had an easier time sitting in the back seat of a car as she could navigate in and out of the seats so much better with her new found strength.

In June, I was ready to submit a video about Claire to the Starting Strength website, when I received an email telling me she would not be coming in for awhile, as she was checking into a rehab facility. I was in shock, and had to read it a couple times before I understood what she was talking about. A few days later, I spoke to Bob who told me what had happened. It was a very hard decision which was not made lightly. I was very proud of her for taking this important step. She had already made a commitment to get stronger. Now she was taking the next step and getting sober. It was a defining moment which meant a lot of change was coming.

I did not see Claire again for almost two and a half months.

Towards the end of June, Bob told me about a visit he had had with her at the rehab clinic. She was taking yoga classes, and was surprised when she was able to get down to the floor and get back up in class without any assistance. I almost cried when he told me. “That is the best thing I have heard all day,” I told him. “That’s why strength is so important.”

Toward the end of July, Claire emailed me that she was ready to start training again. About two weeks later, on August 13, 2019, she came for her first session since the end of May. She was very nervous, and told me how horribly weak she felt. She was not sure what she could do. We started slowly, squatting to a high box again. We worked up to 12 lbs that first day. By her fourth session, she was back under the 25 lb cambered bar. Two weeks later, we lowered the box and Claire squatted 35 lbs for sets across. She soon realized she had lost very little strength during the almost three months she was away. In reality, her newfound sobriety was allowing her train even better than before. I told her this after our fifth session back, and I reminded her over and over again how strong she was, and how much stronger she would become on this new journey.

Before finishing this article, I asked Claire to share her own thoughts about her sobriety:

Recently, I started an incredible journey into recovery from alcoholism.  Recovery has three aspects: spiritual, emotional and physical. In the beginning, I found myself neglecting the physical portion.  For myself, the importance of physical recovery is twofold. First, it builds up my strength, stamina and confidence. Second, it helps me meditate and bring myself back to the present.  Meditation comes from the weight and repetitions of each set. It is hard to think of anything else when I deadlift 80 lbs.

I have never met anyone quite like Claire. She has faced so many challenges in her life. But I think finally facing her alcoholism this past summer may have been the biggest challenge of all. I am so proud and honored to be her coach. Now she has yet another obstacle ahead of her. On Friday, September 27, 2019, Claire had an operation on her left ankle to improve her range of motion. She will never have complete mobility in this ankle due to her cerebral palsy, but it should help relieve some of the pain she has experienced over the years. Her biggest concern when she told me she was having the surgery? Missing her training sessions. She was so upset that she was going to be out for two weeks and asked me what could we do when she was able to get back in. Plenty, I told her. And we will figure it out together. 😉