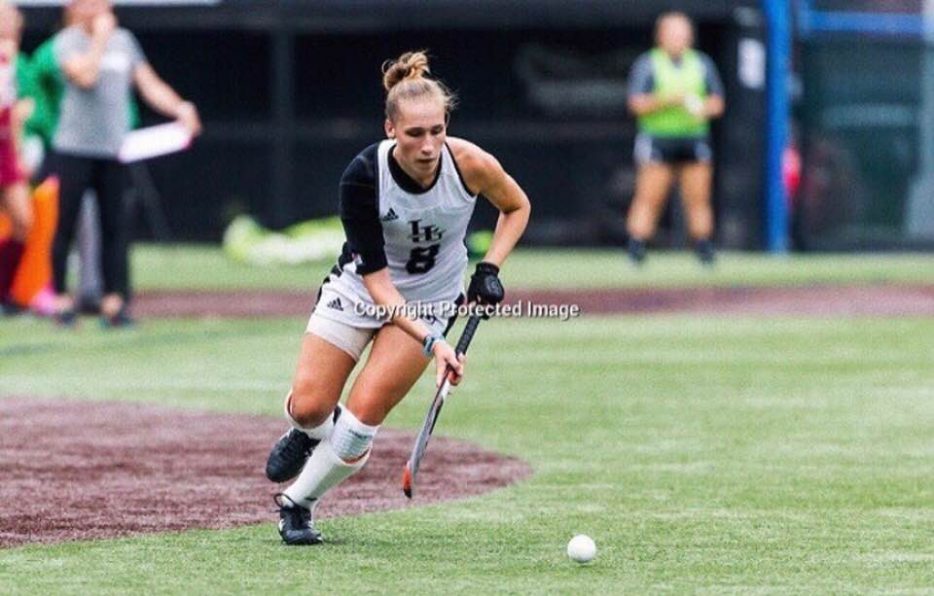 Lydia was encouraged by her mother and sister to join us last summer for training. Although she was hesitant to try something new at first, after a few sessions, she quickly realized the importance of what she was doing and how it would help her on the field. When she returned to us this summer, she was in PT for a post surgery labral tear in her shoulder. We got her back under the bar and started off slowly with some ring presses as she continued with her PT. Here is her story.

Sports have been an integral part of my life for as long as I can remember. I played soccer and field hockey growing up, and then started running track in high school. I tried playing basketball for a few years, but I soon realized my lack of hand eye coordination was best suited for sports on the ground. After high school, I continued my field hockey career at the division 1 level for Long Island University in Brooklyn, New York. I was lucky enough to play three years before retiring for academic reasons.

During a practice last September, I fell during a battle for the ball with one of my teammates, dislocating my right shoulder and leaving me with a posterior inferior labral tear. But that didn’t stop me from playing. For the next month, my arm was either wrapped for practice or immobilized in my sling. After our season ended, my trainer and I tried to increase my range of motion and decrease my pain through physical therapy. I also continued to lift with my team in the weight room with a modified program. Three months of limited improvement led to a steroid injection in my shoulder. After that failed, the only option left was surgery.

In April of this year, I had an arthroscopic repair of my right labrum. Fortunately, my surgeon was able to complete the repair without using stitches so the recovery time was estimated at three months rather than six. Throughout this whole ordeal, I never stopped going to physical therapy. I was in the training room three times a week up until the day before my operation. Before the surgery, we focused on increasing my strength to ease the recovery process. After the procedure, I returned to the training room within a few hours. I iced my shoulder for a couple days, and then began to move my arm again. I started with simple wrist and elbow exercises for the first couple weeks. Three weeks post-op, I was moving my shoulder.

I started training at Fivex3 last summer after both my mother and sister asked me to give it a try. I knew that I had to stay in shape for my upcoming hockey season, so I agreed, even though I was a little hesitant at trying something new. My previous lifting experience was with my team where the strength coach’s attention was split between twenty people. The individual attention and overall atmosphere at Fivex3 gave me a whole different lifting experience than I was used to, and after a couple of sessions training with Emily, I was hooked. I spent the rest of the summer building up my strength and was eager to see how my training would pay off when I went back to school in the fall.

This summer, my return to Fivex3 was not focused on preparing for preseason, but on aiding the recovery of my shoulder. My lifting began one-month post-op. Emily set me up with a special bar that allowed me to squat without hurting my shoulder, as well as exercises to start increasing the strength in my right arm. I also got to deadlift again, which is my personal favorite. It was the first time that I worked out since my surgery and aside from the soreness, I felt great. My continuous trips to the gym generated quick results. My physical therapist commented on my quick progression in my exercises and my increase in range of motion. I was able to move my shoulder in ways that I hadn’t since last August. Finally, I was getting positive results.

Right after my surgery, my physical therapist sat me in front of a mirror and began my range of motion exercises. My therapist told me while she was moving my arm to watch her through the mirror. Even though my muscles were not doing any work, my brain would see that my arm could, in fact, move. The sight of my moving arm would help my brain send a message to my recovering muscles to move my arm normally. Sure enough, at my next session, I was moving my arm almost twice as far. Lifting at FiveX3 had the same effect as that mirror. It showed me the capabilities that my body knew I could accomplish, while my brain was too scared to try. It gave me the confidence to push myself to the limit without fear of injury.

Now, my range of motion is as close to normal as you can get. I was able to finish physical therapy almost two weeks earlier than planned, and my pain has decreased drastically. I strongly believe that returning to lifting and exercise in general so soon after surgery allowed a faster recovery. Hopefully, I’ll be surpassing my pr’s from last summer soon.