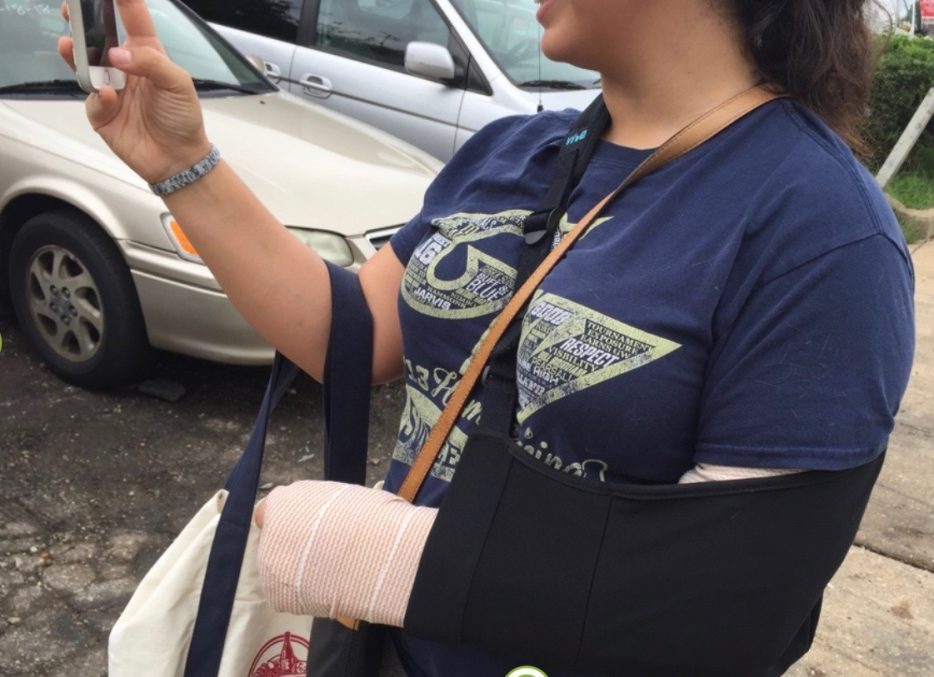 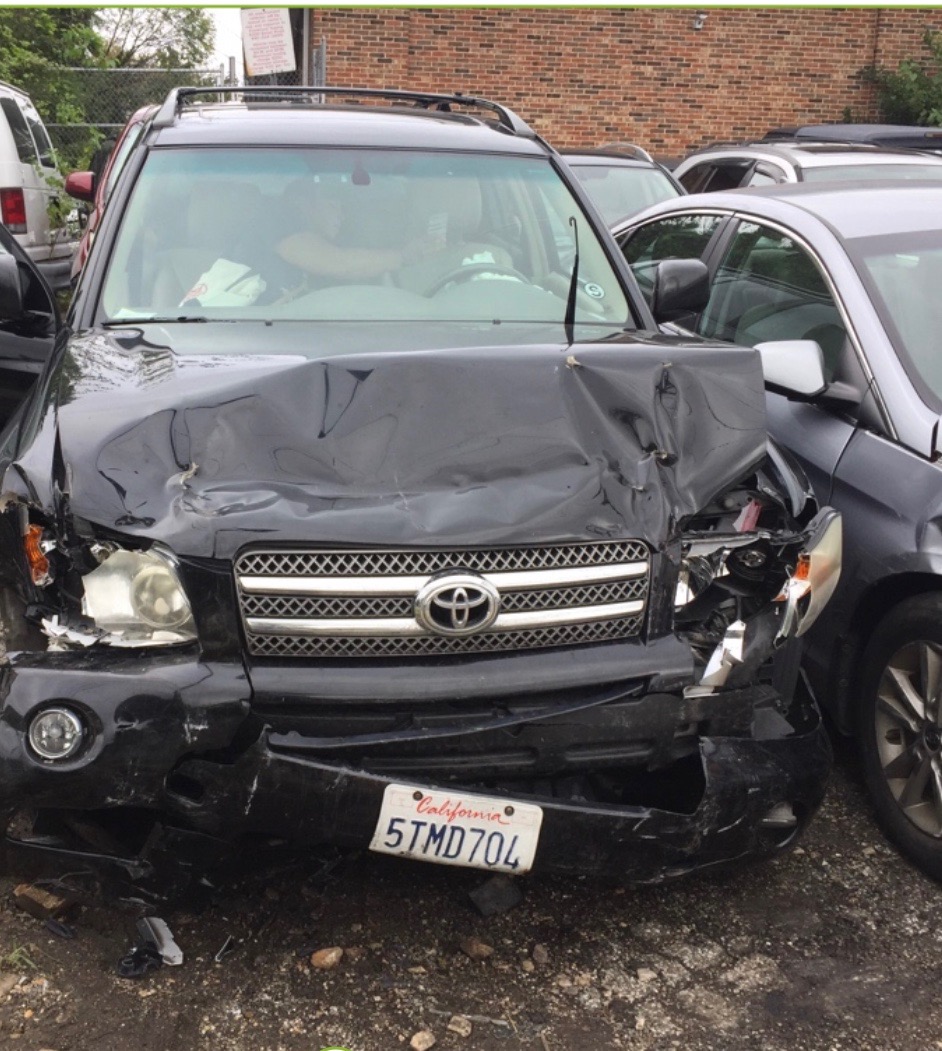 “Hi Emily. So I have some bad news. I was in a car accident this morning and I broke my arm. I am totally okay otherwise but honestly my first reaction was just being angry that I won’t get to compete on Sunday. Ughhhh.”

Two days after the accident.

Lauren was registered for the 2018 Charm City Strongwoman Contest that Sunday, her first contest with us. She was really disappointed as was I….but I was also happy that she had not hurt herself any more.  The car was totaled. She wasn’t. And, as it turned out, it wasn’t her arm that was broken, just her wrist, which was even luckier.  Even though she could not participate in the contest, she still turned up that Sunday and competed in one of the events: The Rolling Thunder Grip Event….with her arm in a cast and sling. 😉 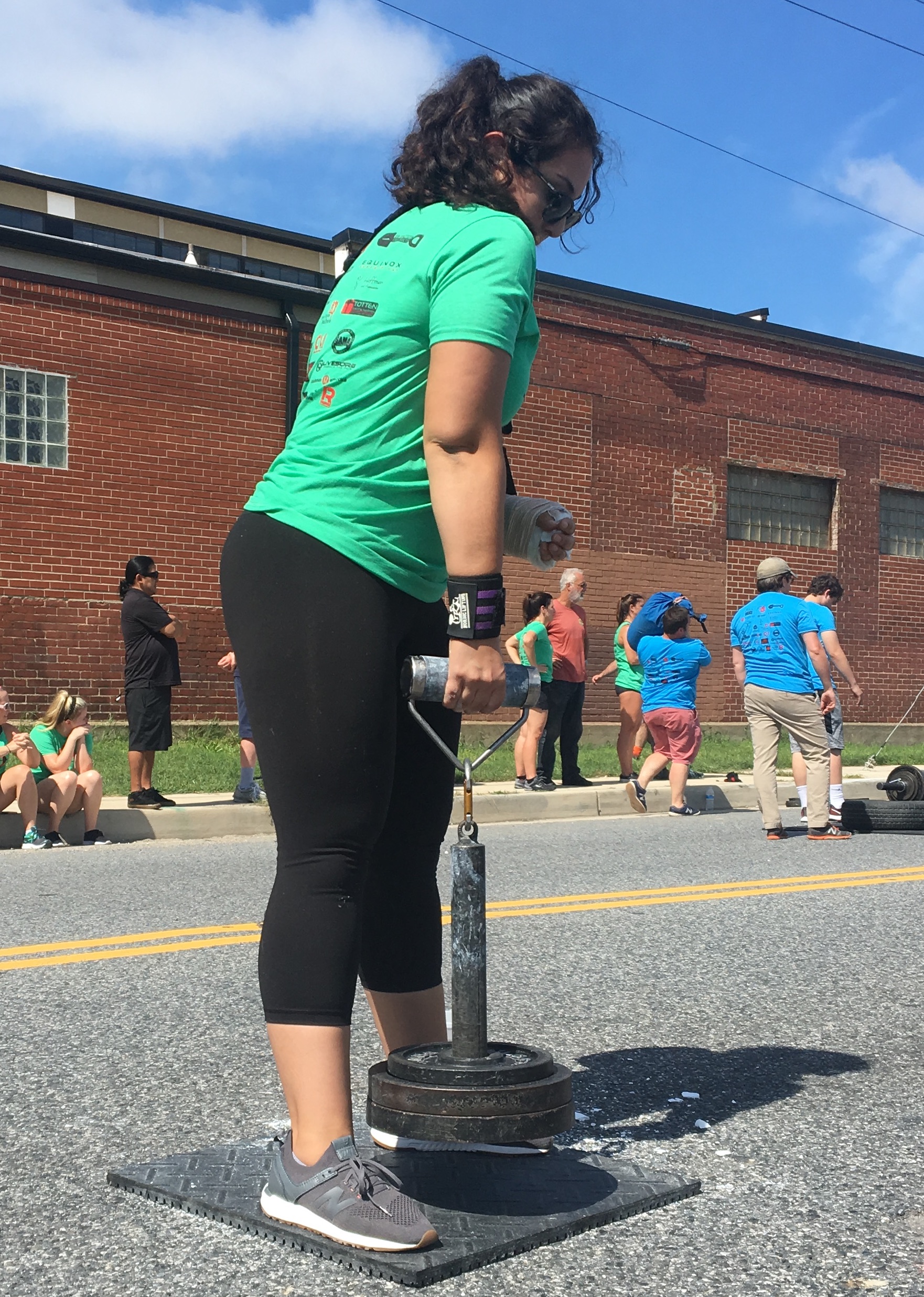 Three weeks later, once she was finished with all the insurance paperwork and was ready to get back to training, Lauren started back with us on October 2, no sling, just the cast.

On her first day back, we worked together to get her on a training program using her one good arm. We chose to use the Safety Squat bar for squats and the cambered bar for good mornings since deadlifts were out of the question at the moment.  We did want her to work her grip a little so we chose to do some light rack pulls.  We also wanted to keep some pressing movement in her body so we did one arm presses with the axle in the landmine. 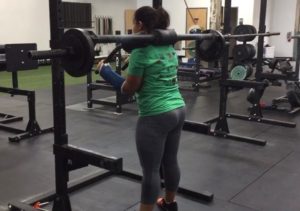 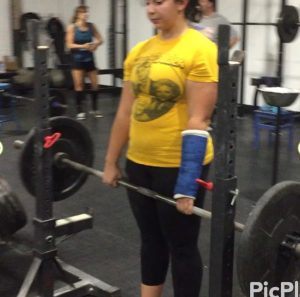 Her beginning weights were a 95lb squat, 65lb rack pull and a 95lb good morning. She was back to training 2-3 times a week given her work schedule and added weight to her lifts each time she trained. We alternated the rack pulls with the good mornings and on days when her hand bothered her a little, she skipped the rack pulls. Lauren got her cast off on October 18 and her doctor told her to restrict usage in the brace for at least another week.  Lauren continued with rack pulls until October 31 when she deadlifted from the floor for the first time since the beginning of September.  By the end of October, she had worked up to a 175lb squat, 85lb rack pull, 25lb one-hand axle press and a 95lb deadlif 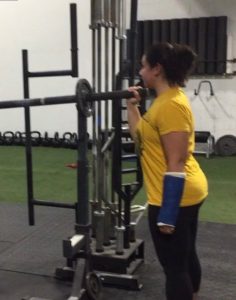 Lauren also started to test her bench and press during this time to see how her grip and wrist could handle the position again.

By the end of November, her brace came off and she was cleared from PT. No additional work was needed and the doctor told her she was pretty much completely healed.

Lauren immediately started benching and pressing again. On December 1, she benched 60lbs for sets of five and on December 3, she pressed 43lbs for sets across.

Since she was now lifting regularly again, Lauren continued with her linear progression with all the lifts and decided to continue with the SSB until the end of December. By December 19, she had worked up to the following: Safety Bar Squat: 215lb (PR!!!), Bench: 80lb, Press: 55lb, Deadlift: 190lb.

The holidays came and she went away to visit her family for two weeks. She returned to training on January 8 and did a little de-load upon her return. She also started back with the barbell for her squats. As of January 17, her numbers are as  follows: 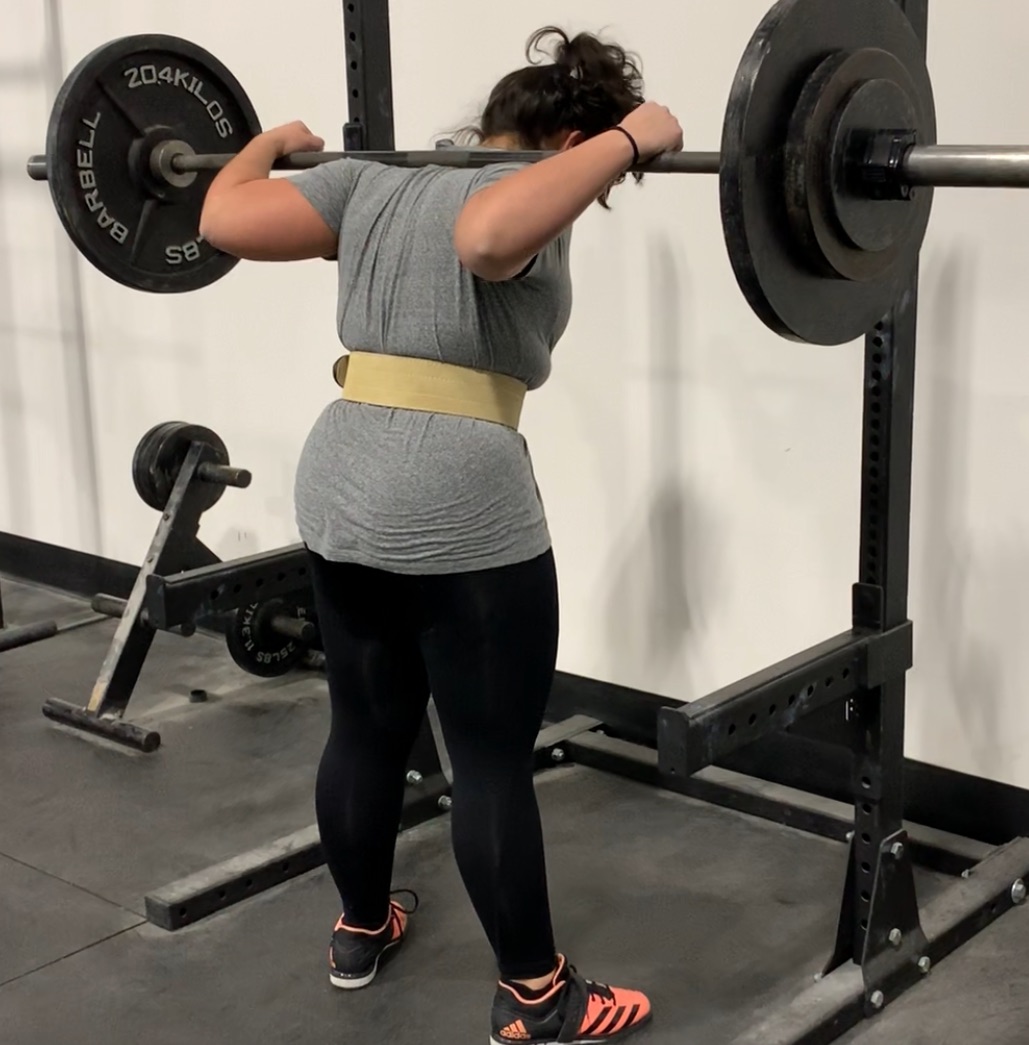 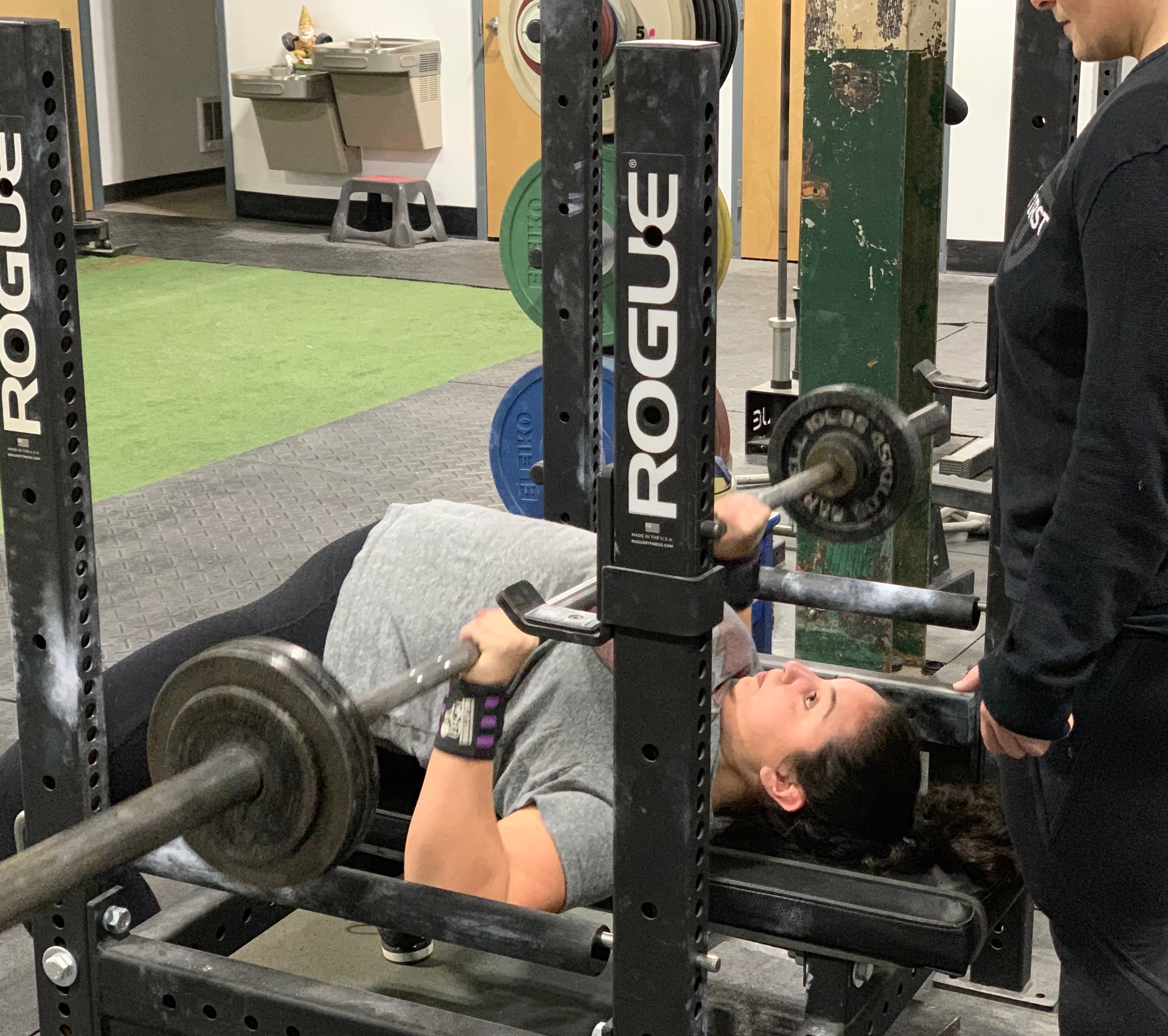 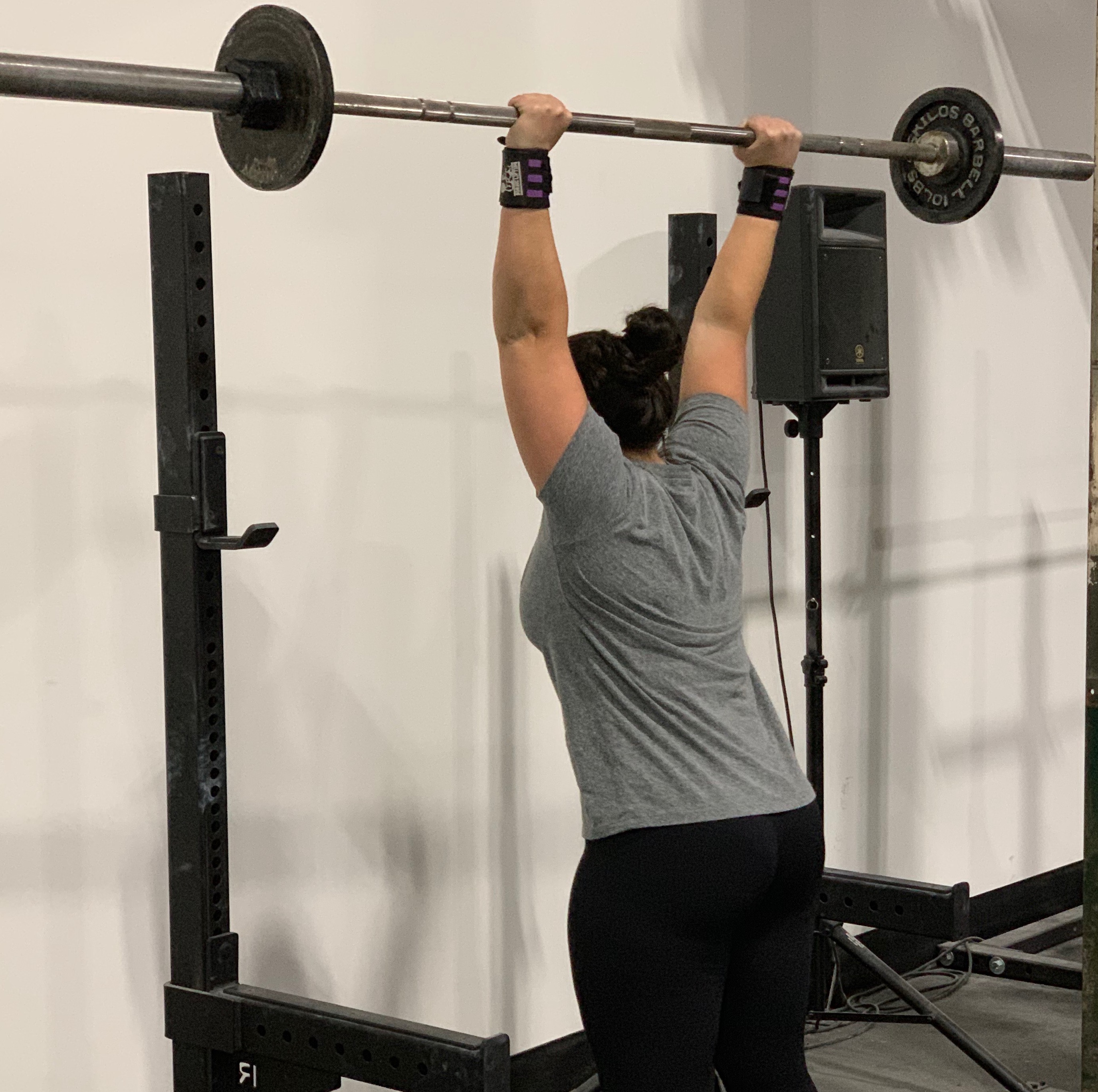 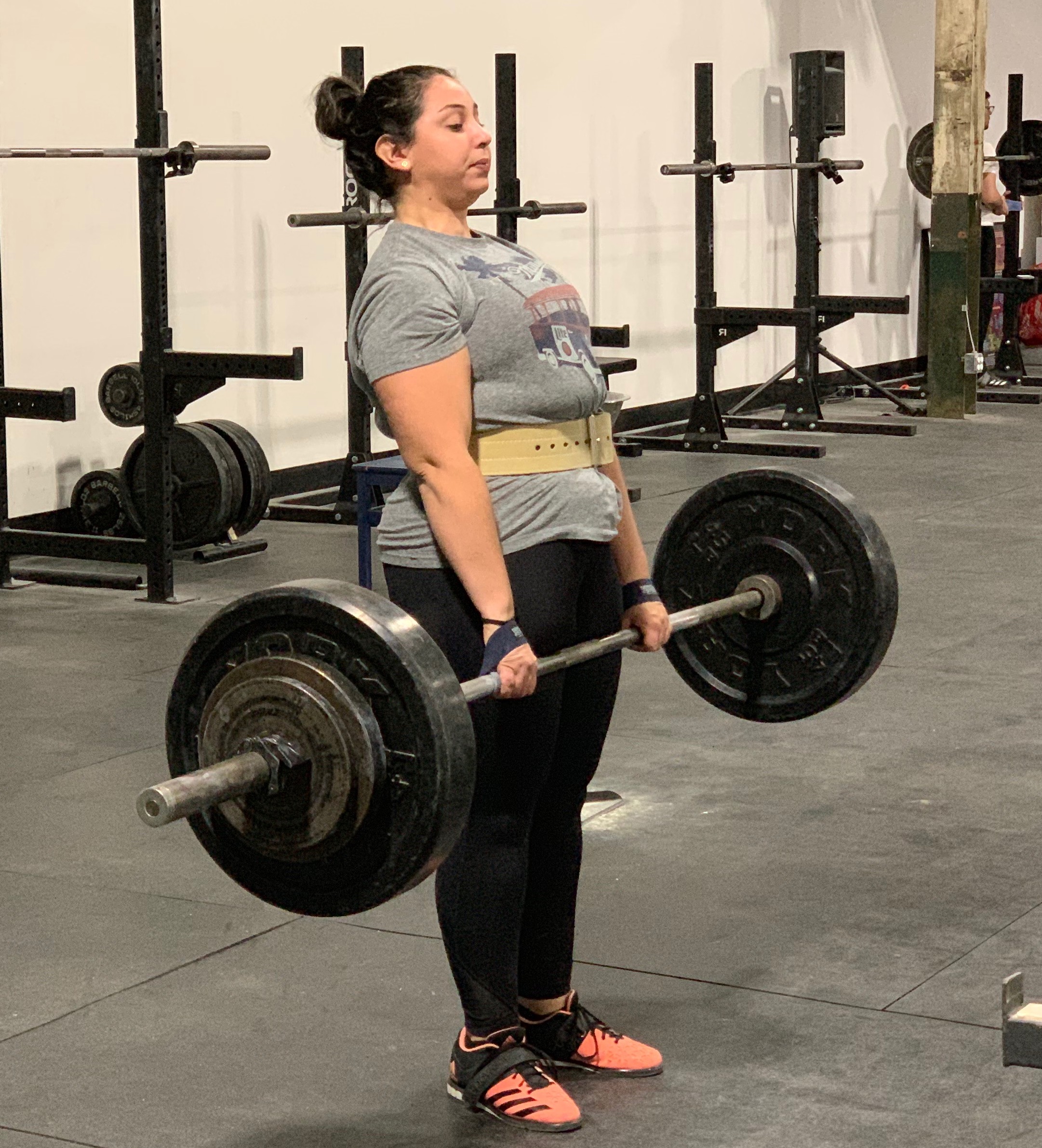 Lauren began training again three weeks post accident and one month before her physical therapy started. By the time she had started PT, she had been squatting, pressing, doing light rack pulls for grip. And the day before she started PT, she had returned to deadlifts from the floor.

During her one month of PT, she continued to squat, deadlift and press, testing her hand a little each time. Is it at all surprising that she only needed 7 PT sessions for her to be “cleared” of PT? I think about what someone with a broken wrist at a local gym or who had listened to others who told her to stop all activity or waited a month to start using her hand instead of getting back into the gym when she could to see what she could do? Physical therapy is good as it makes people have to do exercises. But with Lauren, her PT was mainly stretches and some grip work to regain her mobility in her wrist. Her strength was already there from her prior training and her continued work in the gym after the accident and throughout her PT which helped her recover even faster. She knew what she was capable of  and she trusted herself and most importantly, she trusted US. When her PT said, “Don’t pick up anything over 5 pounds,” Lauren nodded and smiled. When she told us, we nodded and smiled. And kept deadlifting. We knew what she needed. She knew what she needed. Would she start with 135? Of course not. That would be stupid and reckless. She started with what her hand/wrist could handle which was about 65lbs. This is how we begin anyone on day one of their strength program. With Lauren, she was injured, so we had to take extra precaution. And we had the equipment to keep her training and make progress. Why would anyone do anything different? 😉

The following paragraph is from Lauren (after I told her I was writing a blog post about her accident and injury and her recovery, she wanted to add something about how happy she was that she had missed only three weeks of training after the accident):

After my car finally came to a stop, I did a quick self-check and my head was OK, my torso felt fine, my legs could move, then I looked down at my left arm… “oh nooooo!”
The first thing I thought after the crash was that I wouldn’t get to compete in the Strongwoman competition that I had been training so hard for. After a long day in the hospital, I finally texted Emily to tell her what happened, and she immediately called me to check in on me and offered to drive me to any appointments or errands I needed help with. She told me that as soon as I felt up to it, they would be ready to set me up with a modified training plan. I cannot be more thankful for the coaches and community that I have at Fivex3. During those first few weeks the only thing I had to look forward to was getting back in the gym and when I finally did they kept me moving, helped me hit a Squat PR 100 days after my injury, and have made my transition back to standard programming seamless. If there was one silver lining from the accident, it’s that I have gotten to work on my form and technique at these lower weights, and I  now appreciate each gain more than ever.
Thank you Emily, Diego and everyone at Fivex3!!
emilyWhat happens when you break your wrist? You keep training.01.22.2019