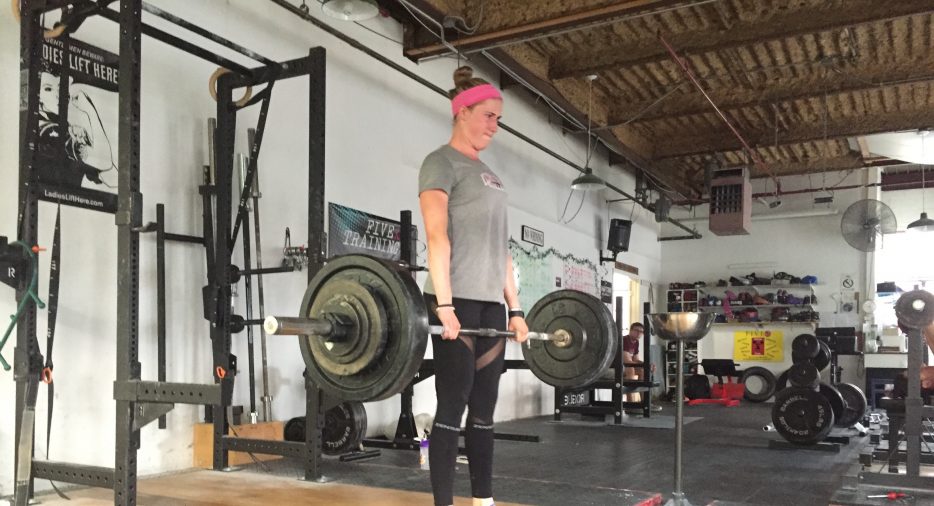 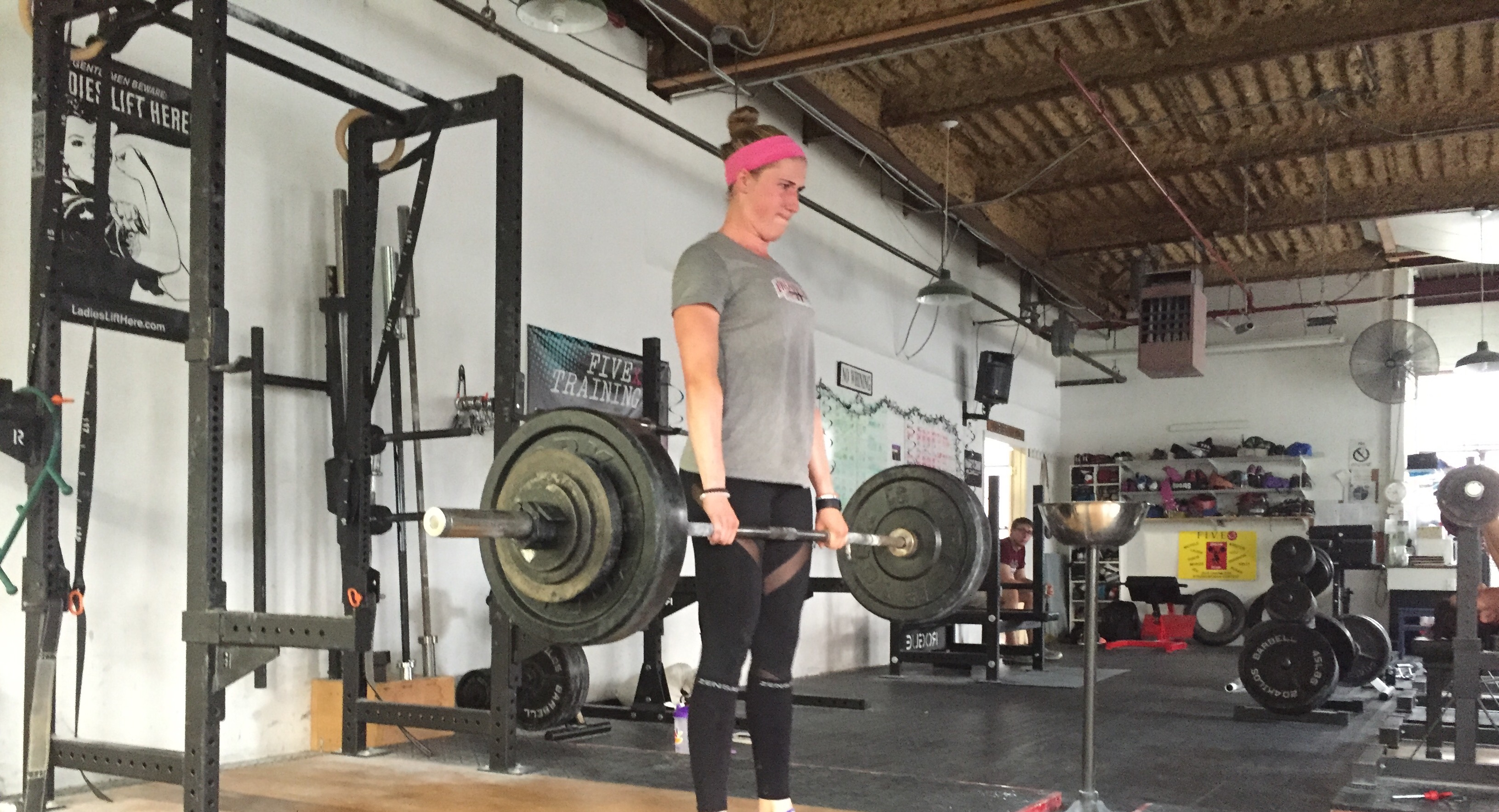 Sally deadlifts 200# on her last day of training at Fivex3.

When Sally walked into the gym on June 1, she looked at me and told me point blank, “My doctor told me I should never, ever deadlift and if I choose to squat, I should never go below parallel.” We both looked at each other and just smiled.  And then we got to work.

Sally joined us this summer for two months. She was referred to us by Jackie, our young swimmer. Sally was also a graduate of Lafayette College and had been a hurdler and javelin thrower during her time in college. At 22 years old, she now had arthritis in both hips and had undergone hip surgery about a year ago to repair a torn labrum. She was heading off to medical school in Ohio in August and Jackie had convinced her to come and train with us prior to moving. Sally had already started training with Jackie during the spring of her senior year, right before they graduated. She had decided to try deadlifting, despite her doctor’s recommendation. When she came to us, she was squatting above parallel and had just started to try deadlifting. She was also benching and pressing under Jackie’s supervision.

On her first day, Sally squatted to parallel. She was hesitant to go below, and I didn’t blame her.  She had doctors telling her that her body just didn’t “work” anymore.  She needed to believe in her body again.  The most important thing I wanted to do was to make her confident in regards to her hip. I told her she needed to give me immediate feedback if she felt anything weird. She agreed. We finished out her squats, keeping it fairly light, just 115lbs to and then moved on to the press. She pressed 60lbs and finished up with 135 bs for her deadlift. Her hip felt a little achy the next session but nothing that would prevent her from training. We squatted to about the same depth, checking in with each other about her hip. Nothing. By her fourth or fifth training session, she was already squatting to depth and feeling great.  She told me she was also starting to wean herself off her arthritis medication because her hip was feeling so much better. After 5 sessions, Sally missed a week due to a family vacation. It did not make any difference. She picked right back up from where she left off. We started on power cleans after her 4th deadlift session and cleaned up her technique. She did great considering that she had never really done power cleans, only hang cleans during her college training.  She started with 93lbs and ended up soon power cleaning more than she had ever done in college.

After her first month with us, Sally sat down with me after a training session and told me she had a few numbers she wanted to hit before the end of July. “A body weight squat,” she said. She weighed 155# so I told her she would hit that and more. She looked at me with surprise. “And a 200# deadlift,” she said. Again, I told her that was easy. She raised an eyebrow and said, “Really?” I looked at her and said, “Really.” And she did. 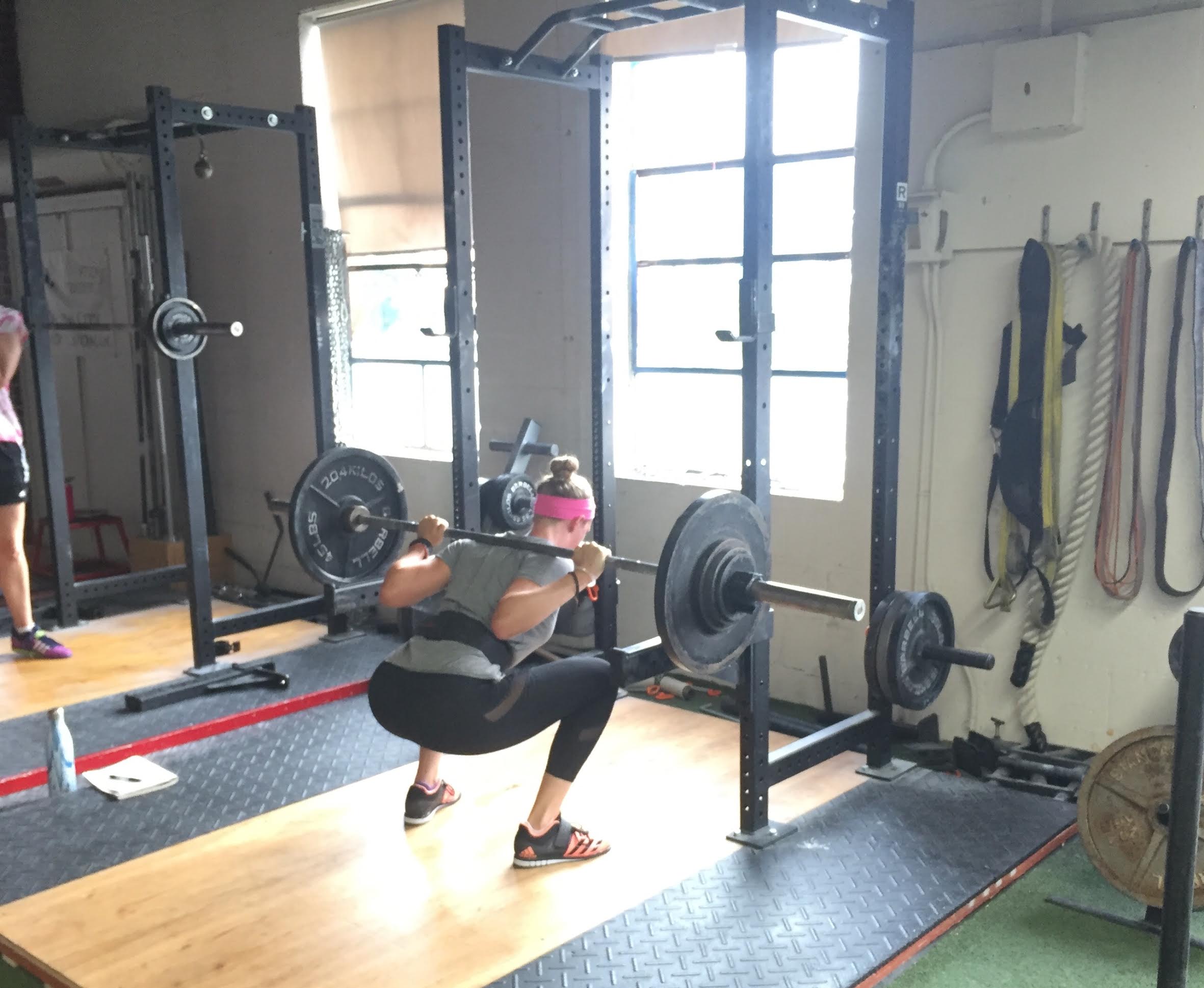 Even with another family vacation to Costa Rica, Sally finished out her last training session with us on Monday, July 25 with a 170lb squat for 5 sets of 3, an 122.5lb bench for doubles and a 200lb deadlift for a set of 5. She had also gotten her press up to 80lb and her power clean up to 110lb.  She is completely off her arthritis medication and told me on her last day that she feels better than she has in a very long, long time. She is planning to continue her training while in medical school and is heading off to Ohio more confident in her body’s abilities than she has in three years.

Good luck Sally! Oh, and don’t forget to send these pictures to your doctor. 😉